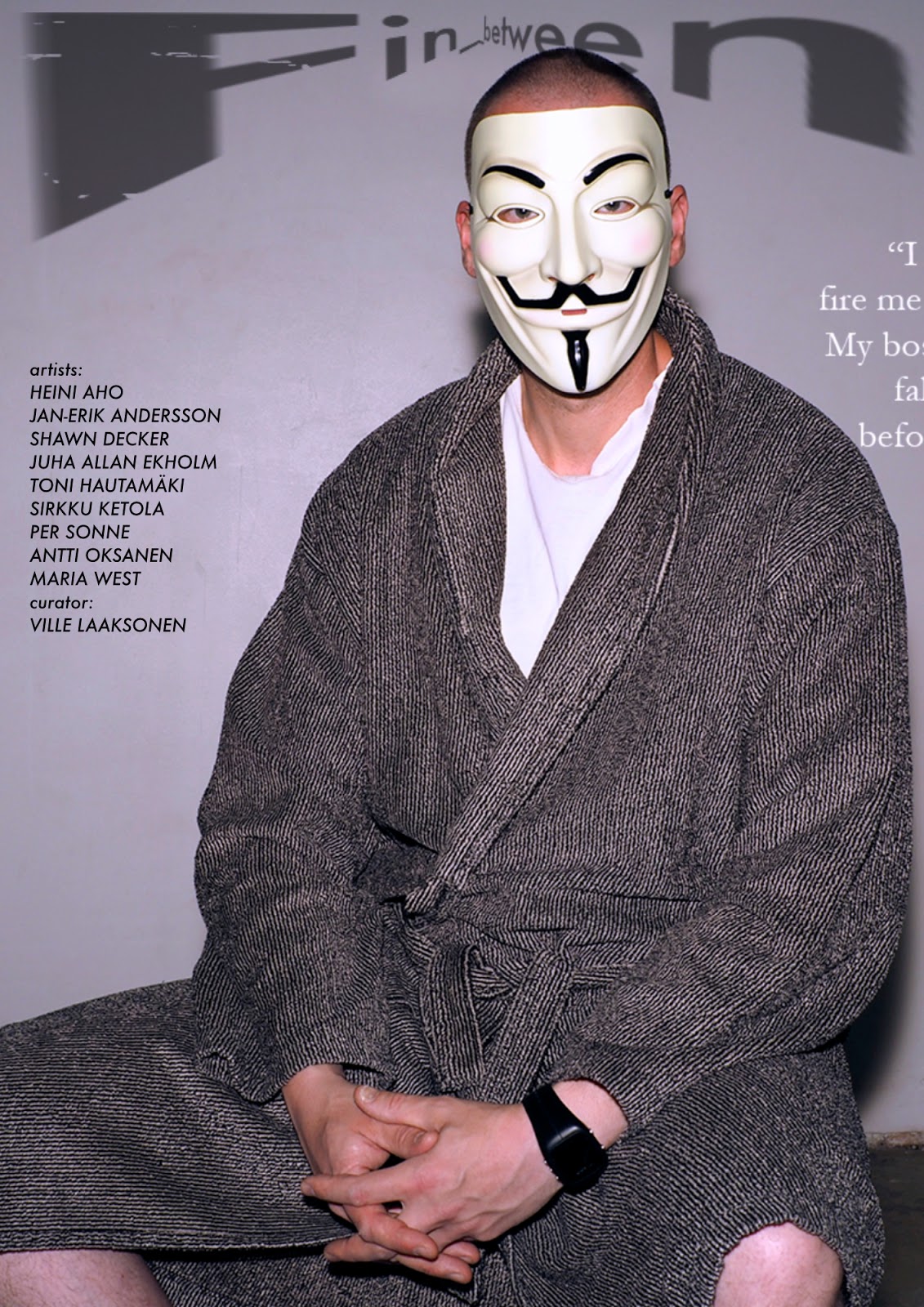 Fin_between exhibition at Arena1 (Los Angeles, USA) engages distinctive spirit of doing and experiencing art in Finland. The artist's work can be seen political in global ways and as an artistic discourse to which Finnish artists share a very unique angle. Located in between the west and the east, edge of the Europe and next to Russia, Finnish people are often reminded “you have already won the lottery as you were born Finnish”. The American dream seems not so far away?

But being Finnish has multiple faces. The top education state and obsession towards winter sports, as well as high-tech brands companies such as Nokia and Supercell hover over our heads. But how many Finnish contemporary artists or their work can you recognize? The role of the artists in Finland challenges the stereotypical ways to approach our nationality, things which are connected to what being a Finn means. The role of an artist in a globalized world is to challenge the political structures. Art is an in-between state where the artist's personal beliefs evoke a conversation with the world.

Ville Laaksonen, who has developed the concept for the exhibition and realized collaboration works as a curator for the Fin_between exhibition. All the artists are members of Artists' Association Arte, which runs the Titanik gallery in the city of Turku and has been active since 1960. Arte is known for its keen interest in how art and artists can shape the use of spaces, both through temporary interventions, and by actively repurposing the unwanted structures. The Fin_between group exhibition aims to promote Finnish artists internationally by collaborating other organizations on a global scale.

The project in Arena1 gallery also collaborates with two Los Angeles based curators Kio Griffith and Ichiro Irie from QiPO. The exhibition is supported by Artists’ Association Arte and QiPO and financially supported by Frame Contemporary Art Finland and the Arts Promotion Centre Finland.

In Fin_between exhibition Heini Aho will be presenting a new installation work where corner shaped artworks from Finland are connected into American objects. Jan-Erik Andersson and Shawn Decker have created a sound installation Apple Concert. The duo will also prepare a performance, taking place in the opening. The Outsourced - Microsoft series is a documentary photography project by Juha Allan Ekholm which portrays stories behind engineers being fired in technology companies. Toni Hautamäki will be implementing his works, which are in legacy of hard-edge-constructivism directly to the gallery walls. Sirkku Ketola's work consists of a large-scale installation including hand-made prints and a video work, which takes us on a trip from a Finnish outhouse to our national landscape. Intervention-artist Per Sonne is currently on a trip: begging money from the streets and shopping centers of Turku, Finland with the destination of Los Angeles, Sunset Boulevard and Venice Beach, USA on his mind. Antti Oksanen and Maria West have made a new video production for the exhibition, which, according to them, reflects on the meaning of locality for artists in contemporary art and a global, transnational world penetrated by virtual networks.

Fin_between exhibition is the counterpart for the QiPO’s Lazy Susan exhibition, which opened at Titanik in June 2016. QiPo's representatives have planned a series of artist and curator meetings, through which artists are able to network directly in the Los Angeles art scene. While visiting in Finland, the curators met approximately 30 artists and number of staff from local art organizations, including Kiasma, the national museum for contemporary art in Finland.