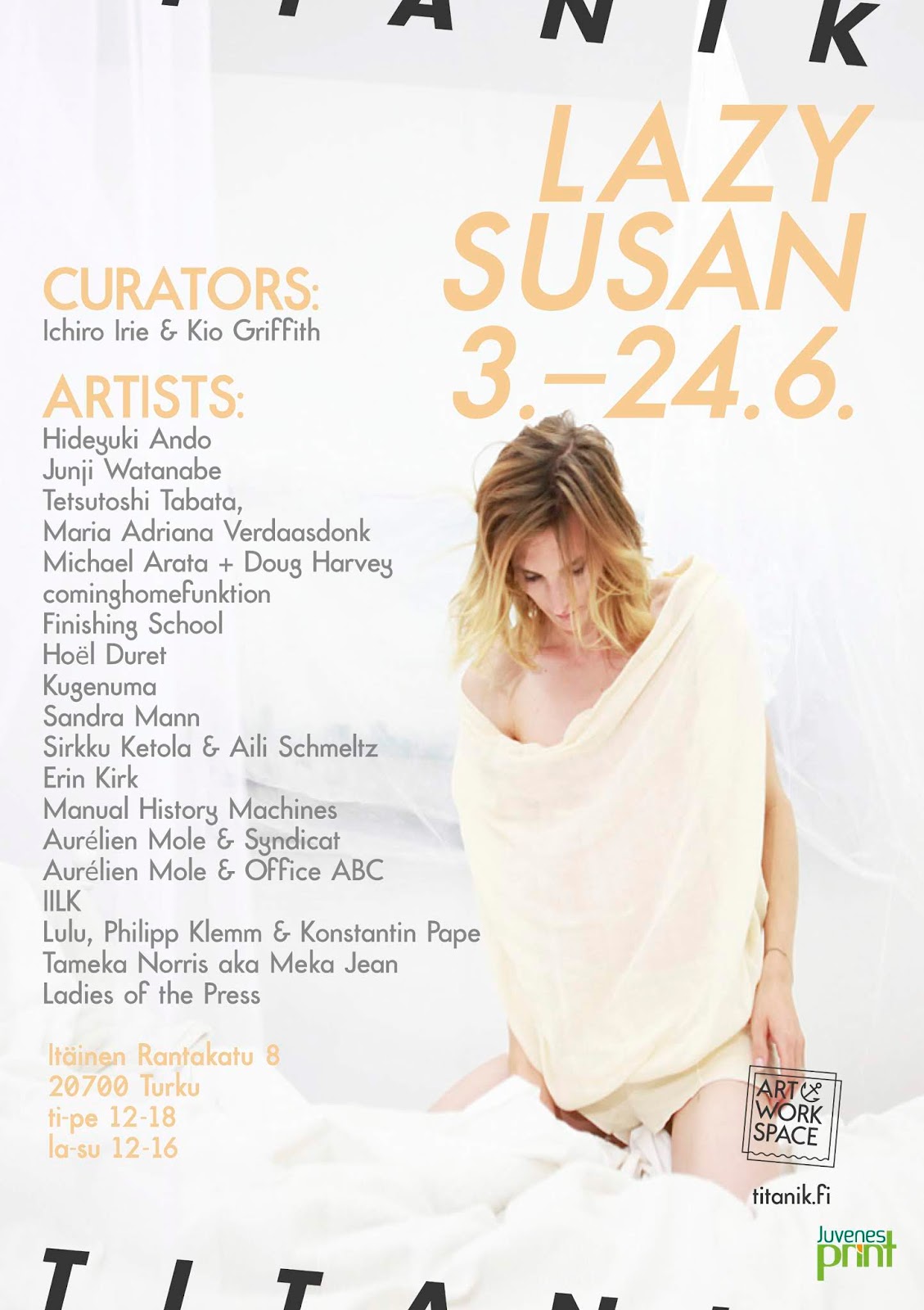 The group show Lazy Susan curated by Kio Griffith and Ichiro Irie is the inaugural effort by the curatorial collective, QiPO. The show explores the concept of collaboration and its limits with the title, “Lazy Susan” referring to the revolving trays often found in the center of round tables at Chinese restaurants in the United States and elsewhere.

This project aims to question to what extend a work of art could be considered collaborative. In film, music or theater, the viewer or listener experiences a work based on the assumption that a work is collaborative, with credits and multiple performers plainly visible. In the case of fine art production, a multitude of people may be involved, in the realization of a piece, but credit is often only given to a single author. In cases such as Koons or Hirst, an army of specialists and assistants are hired in the production process. With many works by Franz West, the gallery visitor or patron completes the work through their interactions with the piece. Also with performance, video and photographic works with multiple performers/models ala Vanessa Beecroft, Stan Douglas or Jeff Wall, the individuals doing the actual performing, acting or posing obviously affect the outcomes of the works.

Among the projects included in the exhibition include cominghomefunktion, a journey currently being made by 5 artists on Ural motorcycles that serve as mobile studios. When completed, they will have traveled from Halle, Germany to New York City and back again, during which time they will cross the Bering Strait on these motorbikes temporarily transformed into aquatic vehicles in order to complete their mission. Also included in the show is work designed and constructed by a team led by Tokyo based artist and inventor, Hideyuki Ando, consisting of a saccade-based light display whose materiality can only be experienced when visitors vigorously shake their heads to view the piece.

Kio Griffith is a Los Angeles and Japan based visual and sound artist, independent curator, writer, and producer. His work includes drawing, painting, sound, video, performance, electronics, language, sculpture and installation. He has performed, collaborated or curated various musicians and contemporary artists, dancers and designers in galleries, museums, clubs and unconventional spaces, locally and internationally. His current projects include project director at TYPE (Tokyo+Yokohama Projects Exchange), curator and development director at ARTRA, associate editor at Fabrik and Artillery magazines, art director at Angel City Jazz Festival and has designed over 300 album jackets. Griffith was recently invited to exhibit in the 2016 Aichi Triennial.

Ichiro Irie Born in Tokyo and raised in Los Angeles, Ichiro Irie is a visual artist, curator and director of the artist-run-space JAUS in Los Angeles. Irie received his B.A. from University of California, Santa Barbara and his M.F.A. from Claremont Graduate University. As a curator, he has organized over 50 exhibitions. In 2001, Irie went to Mexico City on a Fulbright fellowship, and between the years 2002 and 2007 he founded and edited the contemporary art publication RiM magazine. As an artist, Irie has exhibited his work internationally in galleries and museums. Irie currently teaches at Oxnard College and Ryman Arts, and is an artist in residence at 18th Street Arts Center.

Organised in collaboration with Ville Laaksonen